Cocaine is a unique drug. It’s expensive, powerful, and has a reputation for being high-class. It’s known as “the rich man’s drug,” and is thought of as the caviar of street drugs. Cocaine is popular with celebrities in the fashion, entertainment, sports, and food industry. It plays a key role in the celebrity drug culture that is constantly making headlines. The drug is also popular among college students and young adults, often used at parties and clubs.

What Does Cocaine do to You?

A small amount of cocaine produces an intense, euphoric high, caused by dopamine accumulating in the brain’s synapses. Those increased levels of dopamine trigger the reward center of the brain. Although this does cause intense happiness and feelings of invincibility, they are often followed with short-term side effects such as anxiety, paranoia, aggressive behavior, muscle twitches, and nausea. Long-term effects of cocaine include a wide variety of serious physical and emotional symptoms, such as sexual dysfunction and psychosis.

The National Survey on Drug Use and Health in 2012 found that almost 4.7 million Americans aged 12 or older had used cocaine in the last year, with nearly 38 million reporting having used cocaine at least once in their lifetime.

The high of cocaine does not last long. When the drug is snorted, it lasts between 45 and 90 minutes. When taken orally, it lasts about 90 minutes. If it is injected or smoked, it only lasts around 20 minutes, but that high is much more powerful. Since the high of the drug is so short-lived, the craving for the drug remains fairly constant and causes dangerous side effects. The most common short-term effects of cocaine use include:

A comedown is a painful reaction that occurs when the effects of certain drugs start to wear off. The comedown from cocaine can cause anxiety, body aches, paranoia, and restlessness. It is often so powerful that people take the stimulant again, in an attempt to offset the reactions. 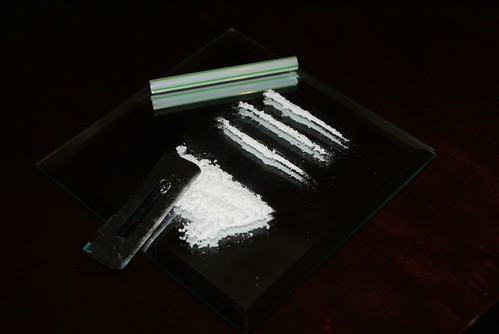 The most severe side effects of cocaine use are overdose and death. According to the Nation Insitute on Drug Abuse, in 2017, the United States saw nearly 15,000 deaths from a cocaine overdose.

Cocaine Effects on the Body

The long-term effects of cocaine do incredible damage to the body. Specifically, it damages the cardiovascular system, nose and throat, and the brain. The cocaine affects the body in different ways, depending on the way the drug is consumed (such as rubbing it on the gums, injecting it, smoking it, or snorting it.) Still, the use of the drug does have the same overall effect on the body.

Chronic cocaine use has been proven to severely impair the cardiovascular system. The high blood pressure, increased heart rate, and blood vessel constriction that are among the short-term cocaine side effects take a toll on the heart over time. Those reactions can trigger a heart attack or stroke, lead to a ruptured aorta, and bring a higher risk of heart failure. It has also been linked to coronary artery disease.

When cocaine is snorted, it can cause chronic nose bleeds and damage the user’s sense of smell. Even the structure of the nose can be compromised, potentially causing septal perforation. In more severe cases, the nose could even collapse. If a user were to share a snorting instrument, such as a dollar bill or a straw, with someone who is sick, they would be at risk of contracting a variety of diseases.

When cocaine is consumed, the neurons in the brain adjust to the increased release of dopamine and become desensitized to it. Over time, a user’s ability to feel pleasure is damaged and they are at risk of anhedonia, when a person is incapable of feeling pleasure. The long-term effects of cocaine may also cause bleeding in the brain, elevated stress hormones, Parkinson’s disease, seizures, and strokes.

Although recovering from cocaine addiction is difficult, it is not impossible. With the proper form of treatment and a strong support group, recovery is attainable. If you suspect that yourself or a loved one is struggling with cocaine addiction, call Treatment Centers XL today.